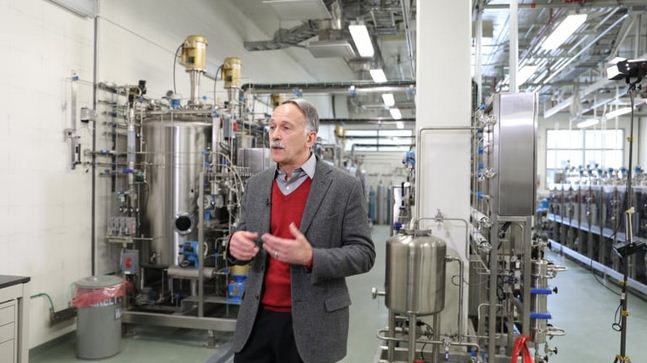 Given their often isolated locations, industrial mining sites require their own source of reliable electricity, typically provided by carbon intensive diesel generation. The modular approach to construction, deployment and decommissioning of small modular reactor technologies enables a clean, emissions free alternative for the mining and resource extraction sector, even in challenging locations.  As much as 40 per cent of a mine’s energy usage is related to heating and ventilation; the versatility of an SMR can again make a difference here, providing the electricity needed to power equipment and vehicles, reducing ventilation requirements, and delivering passive local area heating to the mine operations.

“Increasingly, nuclear technology is being seen as a viable clean energy alternative for industrial applications,” commented Corey McDaniel, Vice-President of Business Development at CNL. “Heavy industry, such as mining, is energy intensive and requires a reliable source of electricity, but also in many cases, heat and steam. Next-generation nuclear energy offers the versatility to meet these needs, and does so in a low-carbon, environmentally-sustainable way.”

As part of the Sustainability Program at PDAC 2019, Dr. McDaniel participated in a panel alongside other leaders in Canada’s nuclear and mining sectors, to discuss the challenges and opportunities to SMR deployment in mining, and linkages with the “Canadian Minerals and Metals Plan.” The panel was facilitated by Natural Resources Canada (NRCan), and featured opening remarks by Diane Cameron, NRCan Director of Nuclear Energy, and panelists which included Ryan Blinn, Westinghouse Electric Company; Vic Pakalnis, MIRARCO Mining Innovation; Frank Saunders, Bruce Power; and Nathan Tedford, Hatch Ltd. Collectively, these panelists represent a broad cross section of stakeholders including technology developers, operators, engineering, academia and potential end users.

“It is critical that we draw in as many perspectives as possible to fully explore the potential of SMR technology in enabling a competitive, low-carbon future for the mining sector in Canada,” added McDaniel. “Making this a reality will require contributions and coordination from a wide range of stakeholders, which is why the panel featured such a diverse group of people, each bringing their own valuable experiences to the discussion.”

Nuclear technology is also thought to provide economic advantages to Canada in addition to environmental benefits. The recently released “Canada’s SMR Roadmap” report, which included input from stakeholders and industries from across Canada, indicates that SMRs could offer significant costs savings compared to diesel generation, particularly for remote industrial operations or small communities. The roadmap also emphasizes the critical role that a demonstration project could play in advancing this technology, a point echoed in responses from the mining industry representatives who participated.

To enable this demonstration to move forward, CNL recently announced a staged invitation process for vendors interested in siting an SMR unit on a CNL-managed site, with several project proponents having now progressed through the initial stages.  While deployment of SMRs is still several years away, CNL is building its expertise and capabilities to support the development of these technologies, and has launched initiatives that would further explore the full range of applications.

For more information on Canada’s SMR Roadmap, including a link to the full document, please visit www.SMRRoadmap.ca.

For more information on CNL, including an update on its SMR siting program, please visit www.cnl.ca/SMR.