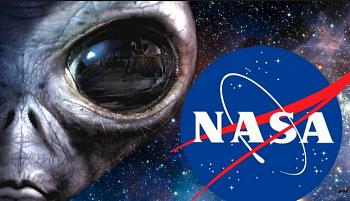 A UFO hunter, Scott C. Waring has accused NASA of keeping skeletons in their cupboard about the existence and life of aliens. Waring says he had to process the photos taken by NASA’s Apollo 15 mission, to reveal their hidden detail, and he says that these hidden details are mind-boggling.

Scott C Waring is a conspiracy theorist who takes quite an interesting the extraterrestrial world. He runs a web page and a YouTube channel where he posts his observations. In recent years, Waring has spotted a lot of irregularities on NASA’s images taken from the Mars and the moon, and he constantly points out these abnormalities in a bid to sensitize people about the existence of extra-terrestrial bodies.

This time, Waring claims he spotted some strange structures on the surface of the moon, a creature that has a square-shaped structure. Waring alleged that NASA intentionally illuminates photos taken of aliens just to confuse other researchers who might have been able to read meaning into such images.

Waring, who wrote on his website, UFO Sightings Daily, said, “NASA added too much light to the photo on purpose in order to cause many of the areas of the photo to appear as white/grey and unclear. Thus bring it back into the proper light and focus creates the original photo as it was first taken. You will notice that the aliens built the structures square partitions. Much like remaking a house and moving the parts to the location to create it. This may be proof that the structures were created somewhere else, then brought to the moon to put together”.

The UFO aficionado whose passion is to ensure that the society does not remain in the dark about the existence of aliens, added “I actually found this several weeks ago but hesitated till now to publish it. I was worried some people may panic. The biggest fear is not aliens attacking earth, it’s that they exist when science says they should not. It causes the person to call into question everything they ever learned in school, church, TV, from friends…and how aliens must have already influenced the direction humanity is currently travelling without anyone ever knowing,”

Waring revealed that he has no doubt that aliens exist, “That’s why I never say I believe in aliens. It sounds like I have doubt but I don’t. I know they exist.” According to Waring, discovering the existence of aliens will change the things we learned in schools and at the church.

The universe is a complex entity which is difficult to understand completely. Worse still, the theory about aliens is mind-boggling to the average person. It confuses the human intellect. While some would try to explain alien sightings as accidents, others believe it to be a coincidence, while some also say that information about the existence of aliens is conjecture made out of speculations.

As a reporter on ibtimes .co.in once wrote: “Reality about alien life defies everything learned in schools and churches.”